Surfing in Hawaii. The tattoos of Tahiti. Ceremonial dance; from the haka’s aggressive howling and stomping to the seductive hip swaying and chanting of the hula. There are many iconic aspects of Polynesian culture. However, one component that is only now starting to become mainstream is kava kava powder. Despite being relatively unknown outside of the Pacific, kava is a non-alcoholic, psychoactive beverage that has been used for thousands of years in Polynesia. Recent interest in kava has increased due to its beneficial effects on stress and anxiety and use as an alternative to alcohol. Traditionally, kava was used for a variety of medicinal, religious, and cultural purposes. To better understand the history of kava and its various uses, it helps to be familiar with the history of the Polynesian people.

Where Does Kava Come From?

Though kava kava powder is used all across Polynesia, it is speculated that it originated from the island of Vanuatu. Polynesia literally means “many islands”. In fact, the Polynesian triangle includes upwards of 1,000 islands scattered across the South Pacific -- Bora Bora, New Zealand, Tahiti, Samoa, and Hawaii to name a few. So, how did one group of people come to occupy an ocean territory more vast than Russia? Genetic, linguistic, and archeological data suggest that sometime between 1000 and 3000 BCE, a subset of seafaring Austronesians left their home in Taiwan and set out for the Pacific islands. These early voyagers would become the greatest navigators of all time, thanks to their seaworthy outrigger canoes and the ability to navigate by the stars. In time, the Polynesians spread across a triangular archipelago spanning 10 million square miles with Hawaii, Easter Island, and New Zealand at its three corners. In addition to fishing, weather prediction, outrigger construction, and navigation, kava became a prevalent aspect of Polynesian life across the islands.

Kava Festival at the University of Hawaii

How Was Kava Traditionally Used?

The name kava comes from the Polynesian word used to describe the plant’s bitter taste. Other names for kava kava powder include awa in Hawaii, yaqona in Fiji, ava in Samoa, sakau in Pohnpei, and malok in Vanuatu -- all of which refer to a bitter or sour beverage. 18th century German explorer and naturalist Johann Georg Forster is credited with recording the first detailed description of kava, naming the plant piper methysticum which means, “intoxicating pepper.”  When detailing the traditional preparation of kava, he wrote that “the kava juice is extracted from the roots of a kind of pepper-tree. The roots are first made into pieces and then are chewed by people who later spew out the pulp into a bowl containing coconut or cold water. After this, the mix is filtered through the coconut fibers and then emptied into a separate bowl for consumption.” While the traditional method of chewing is still practiced on occasion, today most Polynesian locals grind the root into kava kava powder before mixing for consumption.

Traditional uses of kava included medicinal, social, and religious purposes. As a medicinal herb, kava kava powder was used as a pain reliever, sedative, muscle relaxant, and remedy for insomnia. Ceremonial kava drinking rituals took place at times of celebration, such as initiations, marriages, and births. Kava was even used after funerals as a way to communicate with ancestors in the spirit world. After the chief took the first sip, a communal bowl would be passed around making the ceremony a time for bonding and socialization between community members. 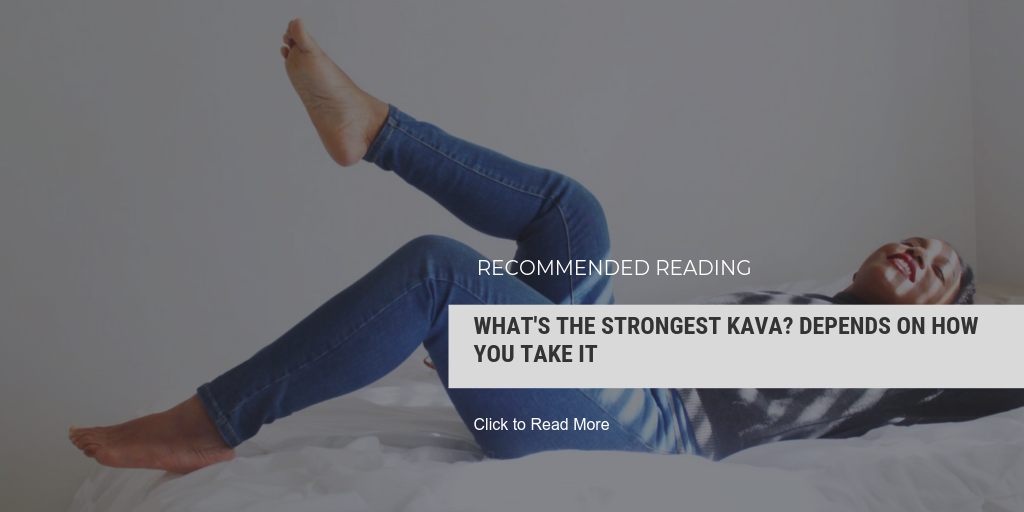 How Is Kava Used Today?

The history and tradition of kava is alive and well in the modern world. Kava is still consumed by locals prior to important religious rituals and ceremonies on many of the Pacific Islands. While a full kava ceremony is rare, it is not unusual for kava to be consumed at formal functions and village social events. Nowadays, many Polynesians islands even have Kava Bars catering to locals that would rather forego the ceremonial aspect of drinking kava. But you don’t have to travel all the way to a remote island to experience the benefits of kava kava powder.

Kava is gaining traction all over the world as a natural remedy for stress and anxiety, as well as a safe alternative to alcohol. With the recent Western surge of interest in plant medicines like ayahuasca, huachuma, and psilocybin mushrooms, it’s only natural to assume kava is due for a rebound of its own. Though it isn’t considered a psychedelic, kava contains compounds called kavapyrones, which induce feelings of relaxation, calmness, and slight euphoria -- much like alcohol, but without the hangover.  A kava high is often described as a state of relaxed focus, making it an optimal choice for those seeking social relaxation with no negative aftermath.

If traditional preparation of kava isn’t your thing, there are many types available depending on your desired effect. There’s tea, instant mixes, capsules, pastes and even kava candy. When used as a kava tincture, it’s a fast-acting and non-addictive way to relax or combat stress.  Regardless of form, when you consume kava, relax knowing that you’re partaking in a millennia old tradition of the Polynesian people.

Blake is a teacher, traveler, and blogger. He has several somewhat unhealthy obsessions, including fitness, street magic, and tacos. Blake currently resides in Baltimore, Maryland and is gearing up for a year-long trip around the world with his wife, Brittany.

What's the Strongest Kava? Depends How You Take It

How to beat anxiety when going back to work?

Is Kava or CBD Oil Better for Anxiety?

How To Microdose with Kava to Reduce Daily Anxiety